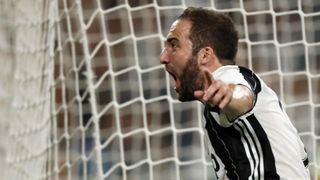 Gonzalo Higuain proved the hero on his Juventus debut as the substitute's second-half strike helped the champions start their Serie A campaign with a hard-fought 2-1 victory over Fiorentina.

The Argentina forward departed Napoli under a cloud to join rivals Juve in a €90million move during the close-season.

And Higuain made a great start in justifying that hefty outlay by squeezing home the winner from a tight angle with 15 minutes remaining in Saturday's contest at Juventus Stadium.

It has been another close-season of change for Massimiliano Allegri's men with star midfielder Paul Pogba departing for Manchester United in a world-record deal, while the likes of Miralem Pjanic, Marko Pjaca and Dani Alves have joined Higuain in moving to Turin.

Juve enjoyed a solid start to the post-Pogba era when Sami Khedira nodded the hosts into a deserved half-time lead, but Nikola Kalinic equalised with 20 minutes remaining with one of Fiorentina's first meaningful efforts on target.

But Higuain, who replaced Mario Mandzukic in the 66th minute, ensured it was only brief respite for the visitors by quickly endearing himself to his new supporters with a clinical winner to make it four consecutive league wins for Juve over Fiorentina.

With Higuain on the bench, Mandzukic - who scored twice against Fiorentina last season - started up front and Dani Alves was the only off-season recruit in the hosts' line-up.

Juve enjoyed a typically authoritative start and they should have been ahead within four minutes when Ciprian Tatarusanu's rushed clearance fell kindly for Khedira, who wastefully lifted his effort onto the roof of the net.

Fiorentina were becoming increasingly suspect in defence and debutant Davide Astori was fortunate to survive a penalty appeal when a cross bounced against his left hand.

And it was little surprise when Juve made the breakthrough in the 37th minute.

Giorgio Chiellini crossed brilliantly from the left and Khedira was clinical this time with a thumping header high past Tatarusanu.

Alex Sandro then squandered an opportunity to double the lead in the final minute of the half, blazing over after Mandzukic had superbly played him in.

Paulo Dybala stabbed a low effort straight at the goalkeeper shortly after the restart, but Juve's momentum slowed and Higuain was summoned from the bench.

The move did not pay immediate dividends, though, as Kalinic rose above Sandro from a Fiorentina corner to brilliantly nod low past Gianluigi Buffon.

However, Fiorentina's joy was short-lived. Khedira's initial effort was blocked, but Higuain was alert to pounce on the loose ball and poke home the winner from tight inside the six-yard box.

Mario Lemina was twice denied a third goal in the closing stages, but it mattered little for the Juve faithful who were left to celebrate a new hero.

- Gonzalo Higuain has scored his first Serie A goal for Juventus with his third touch after coming on from the bench tonight.
- Paulo Dybala has attempted six shots tonight against Fiorentina, with none on target – that is his most without finding the target in a Serie A game.
- Higuain has now scored seven goals over his last four Serie A appearances between this and last season.
- El Pipita has found the net in each of his last three league appearances against the Viola.
- Prior to tonight, Nikola Kalinic’s last Serie A goal had been scored also against Juve, back in April.