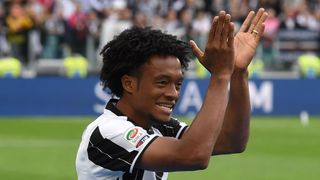 Juventus general director Giuseppe Marotta says the Serie A champions have not given up hope of luring Chelsea winger Juan Cuadrado back to Turin.

The Colombia international, 28, spent the 2015-16 on loan at Juve, but he returned to Stamford Bridge following the appointment of Antonio Conte as Chelsea boss.

Nevertheless, Juventus remain hopeful Chelsea will allow Cuadrado to leave before the end of the transfer window.

"A small opportunity has opened up again. We are keeping a close eye on the situation, with all due respect for Chelsea, who still own the player's rights," Marotta told Sky Sport.

"Cuadrado is a player we like a lot. He has already had a positive experience at Juventus last season."

Marotta also touched on the situation of Simone Zaza, who was expected to leave Juventus for Wolfsburg, and revealed that the Italy international's proposed move has seemingly collapsed for now.

"There have been some problems," Marotta added.

"For now Simone is a Juventus player. We will see whether he stays. It's all about what the players want."