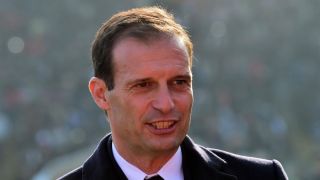 Massimiliano Allegri is preparing his Juventus side for a "sprint finish" to the Serie A season and wants to see stronger performances against lower ranked sides.

The Scudetto holders recovered from a poor start to the campaign in which they won just three of their opening 10 fixtures to head into the mid-season break in fourth position, just three points adrift of leaders Inter, after seven consecutive wins.

Allegri credited the players for turning their fortunes around and believes they cannot afford to slip up against teams below them in the table as they chase a fifth straight title.

Juve have dropped points against the likes of Udinese, Chievo and Frosinone this season but the coach sees Wednesday's clash with bottom side Verona - without a win in 17 top flight fixtures this season - as a chance to begin a title charge in a positive manner.

"The lads have put a difficult situation right, because we were 12 points behind [sic 11 points] and we put a run of important wins together," Allegri said on Tuesday.

"From tomorrow onward the sprint to the finish begins, the second half of the season where those who make less mistakes have more chance of winning.

"So we have to be aware, we're still three points off top spot with two games to go until the end of the first round of fixtures.

"We'll see how we end the first round, but we have to be aware that from here until the end of the season we'll have to make as few mistakes as possible because we don't have much time to recover."

With just four points separating the top five teams in Serie A, Allegri does not believe the title will be decided until late in the season.

"I think this year's Scudetto will be decided in the final six games of the season," he added.

"I think this year [the number of points to win the title] will be around the 82 mark."