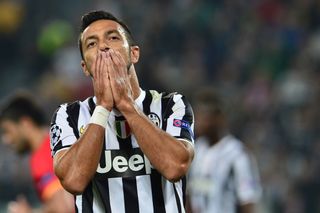 The 30-year-old, who has made seven appearances for Antonio Conte's side this season, suffered the setback in training on Tuesday.

Quagliarella has scored in both of Juventus' UEFA Champions League matches this term but will miss their trip to Real Madrid next week and could also be absent for the return leg in Turin next month.

Conte's men could also face four Serie A matches without the striker.

"Fabio Quagliarella picked up an injury yesterday, and tests which he underwent this morning have revealed damage to his right adductor longus muscle," a statement on the club's official website read.

While the loss of Quagliarella is disappointing for Conte, he still has Carlos Tevez, Fernando Llorente, Mirko Vucinic and Sebastian Giovinco at his disposal in attacking positions.