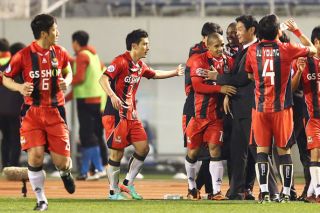 Incheon are just one of two teams without a win this league season - ironically, the other happens to be the only unbeaten side in the Korean top flight, Sangju Sangmu.

However, a run of three losses looks set to become four as Jeonnam make the long trip north on a good run of form.

Ha Seok-Ju's men sit second with nine points, after narrow 3-2 and 1-0 victories over Gyeongnam and Ulsan, goal difference behind the latter.

Incheon, meanwhile, have shipped seven goals in four games, although two of their defeats were slender 1-0 scorelines either side of their 3-0 drubbing at the hands of Ulsan.

Ulsan will be looking to bounce back from their defeat to Jeonnam, when they host Seoul on Saturday.

Seoul, who finished fourth last campaign, got off the mark with a win over Jeju United last time out, while Ulsan saw their perfect season ended.

Also on Saturday, Pohang Steelers host Sangju Sangmu, with the latter on a run of four consecutive draws.

Despite being yet to suffer defeat this season, Sangju are eighth in the table, while Pohang - with two wins and two losses - are fifth.

Third-placed Jeonbuk Motors will look to get back to winning ways when they host Seongnam, after following their two wins to start the season with a draw and a loss.