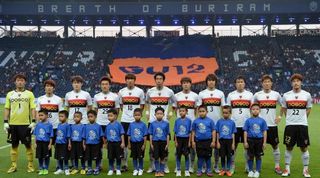 Their task was always going to be tough on Sunday against league leaders Pohang, and Shin Kwang-Hoon put Incheon on the back foot when he opened the scoring in the 16th minute.

Kim Gwang-Seok and Lee Myeong-Ju added two goals in the final five minutes to complete the victory and record Pohang's fourth win in a row, while Stefan Nikolic was dismissed for the strugglers with three minutes to play.

Jeonbuk Motors remain two points behind Pohang in second place after their 4-1 win over Gyeongnam, with Lee Dong-Gook netting his fourth goal of the season from the penalty spot.

Third-placed Jeju United collected a 2-1 victory against Busan I'Park, although they had to come from a goal behind to secure the three points thanks to Yoon Bit-Garam and Jin Dae-Sung.

Jeonnam Dragons' topsy-turvy campaign continues as they put last week's defeat to Jeonbuk behind them with a 1-0 win over struggling Seongnam.

They were made to wait though, with Lee Jong-Ho converting the only goal of the game with six minutes to play to keep them in touch with the top three.

Despite having just a solitary win to their name this season, Sangju Sangmu extended their unbeaten run to four games with a 1-1 draw against Ulsan, a result that leaves the latter five games without winning after Kim Yong-Tae cancelled out Lee Jung-Hyub's opener for Sangju.

Meanwhile, Seongnam dropped to second bottom after their defeat as Seoul recorded a 1-0 victory over Suwon Bluewings.