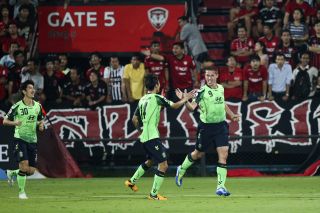 Hwang Jin-Sung twice cancelled out goals from Wesley with Sunday's clash looking as though it would head for a draw.

With Jeonbuk Motors having beaten Jeju United 3-0 on Saturday, it was vital that Hwang Sun-Hong's men did not drop points and a minute from time Pohang snatched a winner.

Shin Young-Jun struck a minute from time ensure his side extended their unbeaten run to seven matches.

Jeonbuk enjoyed a comfortable win over Jeju a day before, leading 2-0 at the break thanks to goals from Lee Seung-Ki and Alex Wilkinson.

Kevin Oris' 10th goal of the season put the game beyond any doubt in the second half as Choi Kang-Hee's men moved ahead of Ulsan and into second.

Ulsan were beaten for the second game running - going down 3-1 to Seongnam at the Tancheon Sports Complex.

Rafinha cancelled out Kim Seong-Jun's opener four minutes from the break. However, goals from Kim Dong-Sub and Ivan Vukovic ensured all three points for the hosts.

There was no change among the bottom five sides although bottom side Daejeon Citizen kept their slim survival hopes alive with their first win since March.

Goals in the eighth and 86th minutes from Kim Byung-Suk and Cesar Arias respectively gave Daejeon the win over Gangwon and moved them to within a point of Kim Yong-Kab's side.

Daejeon are now three points off the relegation play-off place after Daegu's winless run was stretched to five games against Suwon Bluewings.

Two goals in the last 14 minutes ensured Suwon moved up to fifth after Incheon United were beaten 1-0 by Busan I'Park.

A second-half penalty from Fagner was enough to secure his side a consecutive 1-0 win while Gyeongnam edged towards safety with a goalless draw against champions Seoul.