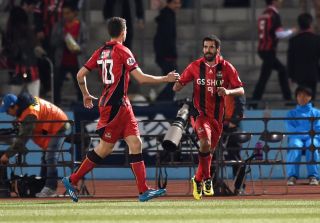 A poor start to the season has left the five-time champions in the bottom half of the table, but Sunday's win sees them narrow the gap on sixth-placed Dragons to just five points.

Choi Yong-soo's side had to wait until the 79th minute in Busan before Mauricio Molina broke the deadlock from the penalty spot and Seoul doubled their advantage in the final minute through Sergio Escudero.

Jeonnam's form slump continued with a fourth consecutive defeat as Yang Dong-hyun's solitary strike gave Ulsan an eighth win of the season and moved them above their opponents into fifth.

After Brazilian striker Kaio had opened the scoring in the 15th minute with his sixth goal of the season, the victory was secured as Han Gyo-won and Lee Sang-hyup netted in the final 19 minutes.

Nearest rivals Pohang Steelers stay one point behind Choi Kang-hee's side after they also produced an impressive away performance against Sangju Sangmu.

The Steelers had to be patient as their hosts frustrated them, but they were rewarded as Ko Mu-yeol and Kang Su-il secured a 2-0 win with goals in the closing 11 minutes.

Jeju United suffered a second successive defeat as Kim Eun-sun gave Suwon Bluewings a 1-0 win and Gyeongnam's wait for a league victory extended to 16 games as they were beaten 2-0 by fellow strugglers Incheon United.