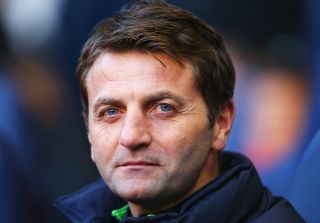 Sherwood replaced Andre Villas-Boas in December following five years on the coaching staff at White Hart Lane and has collected seven wins from his 12 games in charge in all competitions as Tottenham continue their challenge for a UEFA Champions League place next season.

Having worked closely with the first time throughout his time at Tottenham, Kaboul feels the 45-year-old is the perfect man to lead the club.

Tottenham have been linked with a move for a more experienced head coach at the end of the season, with Louis van Gaal reported to be a candidate, but defender Kaboul would rather Sherwood was given a chance.

"He deserves it," the Frenchman told the Evening Standard. "He knows the club well, he's been here for a long time and he knows exactly what he's doing.

"He learned a lot in the past and the best fact is that he played football at a high level. His playing career is important, because he knows what it is like for us.

"We don't waste time on other stuff, because he went through everything and he understands. He knows the game perfectly. I remember that when Harry Redknapp was manager (from 2008-2012), Tim and (coaches) Les Ferdinand and Chris Ramsey would come to nearly every game.

"Wherever we were playing, it didn't matter; they would be there. They would talk to us about how to deal better with certain situations on the pitch and even then, I could see Tim becoming a manager. He just had to be patient and wait for his chance."