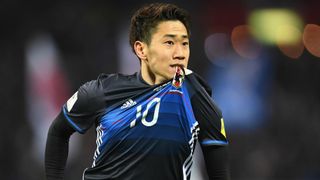 Japan could be without Shinji Kagawa in next week's World Cup qualifier against Iraq after he suffered a shoulder injury.

The Borussia Dortmund playmaker had to be carried off on a stretcher after falling awkwardly in the early exchanges of Japan's surprise 1-1 friendly draw with Syria on Wednesday.

Head coach Vahid Halilhodzic admitted that the problem was a concern ahead of his side's journey to Iran, where next Tuesday's meeting will be held.

"We struggled at the start, in part due to Kagawa's injury," said the 64-year-old.

"I have concerns over Shinji of course, which isn't helpful as we travel tomorrow [Thursday]. This result has provided us with a timely warning for the game with Iraq."

Yasuyuki Konno cancelled out Mardik Mardikian's shock opener in Chofu, but Japan were largely unconvincing in their warm-up for next week's game.

They sit top of Group B of the Asian qualifying section after seven matches, with the top two from each pool guaranteed a place at the 2018 finals in Russia.

There have been worries that the match could be called off following the terrorist attack in Tehran, in which at least 12 people were killed and several injured by gunmen and suicide bombers.

However, Japan Football Association president Kozo Tashima was quoted by AFP as saying: "We will go under the assumption that we will play the game as scheduled."