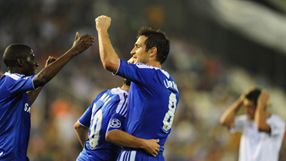 Frank Lampard put Chelsea ahead in the 56th minute at the Mestalla but his fine goal was cancelled out when Ivory Coast forward Kalou, who had replaced Lampard only minutes earlier, flapped an arm at a Valencia cross and the referee pointed to the spot.

Striker Roberto Soldado struck the ball low to goalkeeper Petr Cech's left for an 87th-minute leveller before Alves produced the last of a string of brilliant stops to deny substitute Nicolas Anelka.

The Brazilian had earlier saved twice from Fernando Torres and once from Ramires during a frenetic period of Chelsea pressure that culminated in Lampard's goal.

"We had chances to make it 2-0 in the second half but we had bad luck," Chelsea manager Andre Villas-Boas said at a news conference.

Asked about the Kalou incident, the Portuguese added: "We don't praise people in public and we don't criticise either. It was one of those incidents you can't control."

Chelsea top the group with four points from two matches, with German side Bayer Leverkusen in second on three points thanks to their 2-0 win at home to Genk. Valencia have two points in third and Genk one point in fourth.

Chelsea, the 2008 finalists, started strongly against a nervous-looking Valencia, who committed a number of mistakes in midfield in the early stages.

The home side's French defender Adil Rami had to be alert to thwart Torres in the third minute when the Spain striker raced through the middle following an error by David Albelda.

Lampard forced a fine save from Alves with a powerful low free-kick in the 14th before Valencia had their first real chance in the 25th when Pablo Hernandez turned Jordi Alba's cross into the side-netting.

Valencia, who were held to a disappointing 0-0 draw at Genk in their opening game, started to come back into the match before halftime but fell behind after Chelsea turned the screw early in the second period.

Alves produced four stunning stops inside three minutes but there was nothing the Brazilian could do when Florent Malouda sped down the right wing and squared for Lampard to smash the ball low into the corner with a superb first-time strike.

The 33-year-old England midfielder was left on the bench against Swansea City at the weekend but provided the perfect response to speculation about his future.

"Lampard put in a fine individual performance and he scored a goal," Villas-Boas said. "He is a great player and we are very pleased with him."