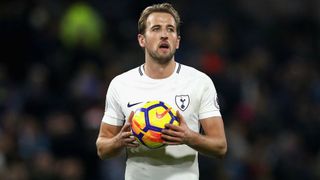 Harry Kane will have to come off the bench if he is to continue his fine goalscoring form for Tottenham, the striker having been named among the substitutes for Tuesday's clash with Swansea City.

Spurs revealed on Friday that the England international had been suffering with an illness and, although he has travelled, he has not been deemed fit enough to start at Liberty Stadium.

That will likely come as welcome news to struggling Swansea, as Kane finished 2017 with consecutive hat-tricks in the Premier League.

"He [Kane] is okay," Mauricio Pochettino told the club's official website. "It's just a bit of a risk to play him from the beginning.

"If we need him, I'm sure we will use him. We play twice in 48 hours and need to manage the team."

Kane's absence means Fernando Llorente gets a first league start since joining Spurs from the Swans in pre-season.

Mousa Dembele and Danny Rose miss out, but there is a return to the squad for Victor Wanyama, who could make his first appearance since picking up a knee injury in August.