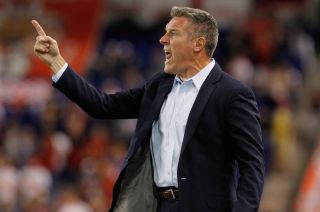 The defending champions looked set to progress after Dom Dwyer scored a 53rd-minute opener of their East knockout cash with New York Red Bulls, but a late double from league top scorer Bradley Wright-Phillips turned the match on its head.

Despite the second of those goals coming in the 90th minute, Vermes said his players had plenty to be proud of.

"Unfortunately, it didn't go our way," he said. "But I can't fault the guys who were out there for anything. They did what they had to do. Unfortunately, we came up short.

"I know they're very disappointed, as is the staff, but they did themselves proud, in my opinion."

And Vermes has backed the Red Bulls to make charge for the title.

"I think they have just as good a chance as anybody in this league," he added. "I'm a big believer that this league has a lot of parity and I truly believe that there are teams that can beat anybody on any day in this league, I just think that.

The Red Bulls will now meet DC United in the Eastern Conference semi-finals on Sunday.