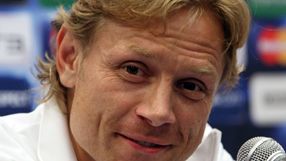 "We played much better after the break than in the first half," the former Russian international told reporters in reference to events in the Luzhniki Stadium where Yuri Zhirkov and Nicolas Anelka scored before halftime.

"We were too scared of our opponents, we had given them too much respect, but if we play them like we did in the second half in Luzhniki and like we played Zenit in the second half, then we have a chance," he added.

Spartak, with six points to Chelsea's nine after three matches, have posted back-to-back domestic league wins since losing to the Premier League champions.

They beat Russian league leaders Zenit St Petersburg before a 2-1 victory over mid-table Rostov at the weekend when Ireland winger Aiden McGeady scored a penalty in added time.

Chelsea, meanwhile, have continued their relentless accumulation of points in the Premier League and will eye Wednesday's clash as an opportunity to simplify the demands on their players and allow Ancelotti the luxury of resting players in their two remaining group games.

Saturday's 2-1 victory at Blackburn Rovers provided more evidence that free-scoring Chelsea are every bit as obdurate as they were when Jose Mourinho was in charge.

"We have a great team spirit in the dressing room. We know we will lose matches but we never feel like we are beaten," Chelsea keeper Petr Cech told the club's website.

"We fight until the last second to try to get something out of the game. As a group we never give up."

Chelsea have lost only one of their last 23 home Champions League matches, keeping 14 clean sheets in that sequence, and will have Didier Drogba available after he sat out the first three group games because of suspension and injury.

Frank Lampard is still not ready to return, although he could be back to face Liverpool next weekend, but in Zhirkov Chelsea have a player enjoying his best form since arriving from Spartak's bitter rivals CSKA.

"I think he needed last season to adapt to a new country," Ancelotti said. "This season he hasn't had a problem and he is being very good."

Spartak will have to shackle Drogba without defenders Sergei Parshyvlyuk and Martin Stranzl but should carry more of a threat at the other end if Brazilian playmaker Alex shakes off a thigh injury that kept him out of the first meeting.

"There's a good chance that Alex could play against Chelsea," Karpin told reporters.