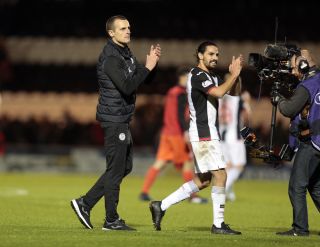 The Paisley club’s stadium should be full to its capacity of around 8,000 for the second leg of the Ladbrokes Premiership play-off final.

There were over 1,000 Saints fans among 11,062 at Tannadice on Thursday night to watch the goalless draw which in truth was drab for large parts but Kearney is relishing the return game.

He told Saints TV: “It is one we look forward to.

“The fans have been outstanding and again they turned up in their numbers on Thursday night and were brilliant for the boys and again we expect exactly the same on Sunday.

“We have 90 minutes to go and win a game of football to get what we want.

“We are halfway through the tie and we have to get the same if not more on Sunday.”

St Mirren, who finished 11th in the Premiership, extended their unbeaten run to seven games but Kearney admitted it was a “tough” watch as always.

He said: “Anyone will tell you the easiest place to be is on the pitch because at least you have some type of control.

“On the sideline you are a like a privileged fan. You get closer to the pitch but bar making  a substitution or two you very much have a lot of faith in your players and thankfully I thought our boys were exceptional.

“The recovery has started and it is the staff’s job now to make sure that everybody gets as much food into them as possible and we do as much recovery as we can in the next couple of days to make sure that  we are fresh and ready to go on Sunday.”