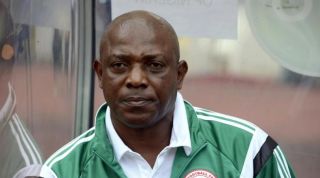 Keshi was surprisingly replaced by Shaibu Amodu after Nigeria defeated Sudan 3-1 in 2015 Africa Cup of Nations qualifying on October 16, with the view of appointing a permanent, foreign coach.

But the 52-year-old will take control of the nation's next two qualifying ties against Congo and South Africa in November after Amodu called for his return.

Amodu pleaded for Keshi to be re-instated as he felt the timeframe at hand was insufficient for him to rebuild the squad.

And the NFF president Amaju Pinnick confirmed on Friday that Keshi, who led Nigeria at the World Cup in Brazil, will return to the role with the team third in Group A, three points adrift of the two qualifying spots.

"I have never had anything against Keshi as a person. Amodu is someone we all respect and since that is his opinion and the Technical Committee has approved, so be it," said Pinnick.

"I have always said that the work of the committees will not be interfered with. We will give the committees the independence to do their work for optimum results.

"I am also assuring Nigerians at home and abroad that the NFF will give Keshi all the necessary support to successfully prosecute the two very crucial final matches of the 2015 Africa Cup of Nations qualifying series."

Amodu added: "I believe Keshi should be allowed to complete the qualifying race he started. I think the mission to qualify is not an impossible task."