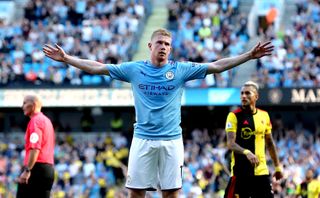 Manchester City are again without playmaker Kevin De Bruyne as they host Wolves in the Premier League on Sunday.

The Belgium international missed the midweek Champions League victory over Dinamo Zagreb after suffering a groin injury in the latter stages of last weekend’s victory at Everton.

Manager Pep Guardiola insists the problem is not too serious but he is not willing to take a risk this weekend.

Speaking at his pre-match press conference, Guardiola said: “Tomorrow he is not fit. After the international break he will be ready. It is not a big problem.”

John Stones also remains on the sidelines but Guardiola added that he is hopeful the England defender will also be fit after the upcoming international break.

Another City player who will not be in international action is right-back Kyle Walker, who has been overlooked by England manager Gareth Southgate for a second successive squad.

Walker now faces strong competition for his position from Kieran Trippier, Trent Alexander-Arnold and Aaron Wan-Bissaka and Guardiola hopes the omission spurs him on.

Guardiola said: “For Kyle, it is a big challenge for him to show the manager from England how good he is.

“Our life in sports is about challenge, about duels, targets, and he has one in front of him in every single game to show how good he is to come back into the team.

“Gareth does what he does for the best of the national team in England, so it is a big challenge for Kyle, but he remains an incredible full-back.”

Guardiola was speaking for the first time since Bernardo Silva was charged with misconduct by the Football Association over a controversial tweet sent to team-mate Benjamin Mendy.

The issue has overshadowed a lot of City’s work over the past fortnight and Guardiola was unwilling to discuss the matter further. “No comments any more,” he said.

City this weekend take on a Wolves side at the Etihad Stadium that have experienced a difficult start to the season.

Nuno Espirito Santo’s side have won just one Premier League match as they juggle the competition with their involvement in the Europa League.

They were also in action against Besiktas in Turkey on Thursday and their schedule is a tough one, but Guardiola is taking nothing for granted.

He said: “Nuno knows how to handle it. Yesterday they made an incredible result. I think they have a big squad and they know what they have to do.”