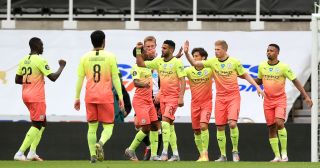 Birthday boy Kevin De Bruyne set Manchester City on the road to the FA Cup semi-finals from the penalty spot as the holders cruised past Newcastle at St James’ Park.

The 29-year-old’s first-half spot-kick gave the visitors the lead, if not one their dominance deserved, at the break and minutes after substitute Dwight Gayle had been guilty of a glaring miss when presented with an opportunity to level, Raheem Sterling made it 2-0 in the 68th minute.

City, who will face Arsenal in the last four as derby rivals Manchester United meet Chelsea, won at a canter having enjoyed significantly in excess of 80 per cent possession in the first half with the Magpies, whose 65-year wait for a domestic trophy goes on, no match for their speed of thought, movement and execution.

With De Bruyne and David Silva orchestrating from the middle of the field and full-backs Kyle Walker and Benjamin Mendy prominent, City pressed the Magpies back deep into their own half from the off.

However, Gabriel Jesus was just inches from opening the scoring when he instinctively stabbed Walker’s driven 17th-minute cross past the upright, and goalkeeper Karl Darlow was grateful to see Mahrez’s well-struck effort suffer the same fate as he dived anxiously to his right.

The pressure was little short of incessant and Darlow had to beat away Sterling’s rising 25th-minute drive on the turn with his side defending for dear life.

They finally succumbed eight minutes before half-time when De Bruyne scored from the spot after Jesus had been pushed inexplicably by Fabian Schar.

The Magpies mustered only two attempts on goal – Andy Carroll’s strike which Claudio Bravo had to save and Sean Longstaff’s which he did not – and it looked a long way back at the break despite Aymeric Laporte heading just wide in stoppage time.

Steve Bruce changed the shape of his team at the break as defender Schar was pushed into the holding position in a 4-1-3-2 formation, and while that got them further up the pitch, it left more space for City to exploit.

Mahrez whistled a 53rd-minute attempt not very far over Darlow’s crossbar and after an increasingly frustrated Carroll, making a rare start, had been cautioned, he and Miguel Almiron were replaced by Gayle and Joelinton.

Gayle should have equalised within two minutes of his arrival, but skied his effort from Allan Saint-Maximin’s drilled cross, and his side were two down almost immediately when substitute Phil Foden picked out Sterling and he cut inside before curling a shot beyond Darlow and into the bottom corner.

It might have been more had Pep Guardiola’s men managed to summon up a little more composure as time ran down, but their task had been completed long before the final whistle.