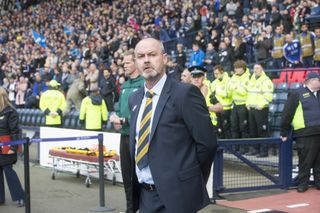 Scotland will be looking for a comprehensive victory to boost their confidence when they host minnows San Marino at Hampden Park on Sunday.

Here, the PA news agency looks at some of the key talking points ahead of the game.

Things can only get better

Clarke said Scotland must ensure their 4-0 defeat in Russia was the “lowest of the low” after they conceded four times in the second half to fall four points behind third-place Cyprus in Group I. While Scotland’s main focus is now undoubtedly March’s Nations League play-offs, the importance of establishing a winning mentality within the camp ahead of these games cannot be overstated. So these final three qualifiers take on extra significance, as any slip-up could be very damaging to their already-fragile confidence, but comprehensive wins and strong performances could just give Clarke’s troops a timely boost.

Scotland have lacked firepower in this qualifying campaign, scoring just five goals in seven games – and two of those came against San Marino, who sit bottom of the FIFA world rankings. Searching for a solution, Clarke called up in-form Dundee United striker Lawrence Shankland. He may ply his trade in the Ladbrokes Championship but the 24-year-old knows exactly where the goal is, having scored 15 times in all competitions so far this season. Clarke has experimented with different forward-line options since taking the helm in May and after bringing Shankland off the bench against Russia, could he reward the former Ayr man with a full debut at Hampden? Celtic duo Ryan Christie and James Forrest may also be considered as Clarke looks for an attacking spark.

Scotland’s defensive frailties were on show again in Russia as they conceded four goals for the second game in a row. Their injury problems have been well-documented, with Grant Hanley recently joining the likes of Liam Cooper, Kieran Tierney and John Souttar on the sidelines, but Scotland must find a way to stop leaking goals. Sunday’s visitors to Hampden Park have not scored in over two years – and the last thing a Scotland side lacking in confidence need is for that run to end this weekend. Uncapped duo Stuart Findlay and Declan Gallagher, who play for Kilmarnock and Motherwell respectively, could be given a chance to impress, while Stephen O’Donnell in is contention to return to the starting XI after missing out against Russia. Whoever features in the back four will have Jon McLaughlin behind them as Clarke looks to give the Sunderland goalkeeper more international minutes.

After watching their side fail to pick up a single point in the last four games and concede 13 goals in the process, Scotland fans can be forgiven for feeling a bit fed up at the moment. That mood could be reflected by the attendance figure at Hampden, where the expectation levels will be extremely high considering their opponents have suffered 34 straight defeats.