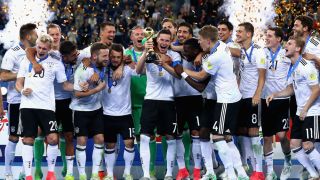 Two of Germany's promising young stars were recognised for their part in an impressive Confederations Cup triumph, as Julian Draxler won the tournament's Golden Ball and Timo Werner collected the Golden Boot.

Head coach Joachim Low was criticised by many after picking an inexperienced squad for the competition in Russia, a decision some derided as disrespectful to the other teams involved.

Die Mannschaft proved to be a serious proposition indeed, though, defying their tender years to top Group B, brush aside Mexico 4-1 in the semi-finals and then secure a narrow 1-0 victory over Copa America holders Chile in the decider in St Petersburg on Sunday.

Draxler has reinvigorated his career by leaving Wolfsburg for Paris Saint-Germain in January and the 23-year-old attacking midfielder was named the player of the tournament after captaining his fellow youngsters to glory and pulling the strings in the final third.

Werner finished level on three goals apiece with team-mates Leon Goretzka and Lars Stindl, the latter the scorer of the only goal in the final at Krestovsky Stadium, but the RB Leipzig man claimed the Golden Boot outright thanks to his two assists.

Chile's Claudio Bravo failed to get his safe hands on the trophy and had to make do instead with the Golden Glove as goalkeeper of the tournament – a trio of penalty saves in the semi-final shoot-out victory over Portugal no doubt playing a key role.