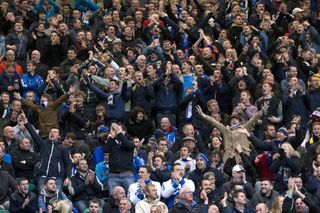 Alex Dyer does not blame the Kilmarnock faithful for staying away – but believes a repeat of their Rangers win will again see Rugby Park filled to the rafters.

Killie chiefs took the decision to slash the Old Firm’s ticket allocation in half last season in a bid to help Steve Clarke’s side in their push for a European slot.

And it paid off as Ayrshire supporters filled up three sides of the ground when Kilmarnock claimed the win over Gers they needed on the final day of the campaign to finish third.

Clarke heaped praise on the home supporters among the 12,250 in attendance that day, urging them to continue turning out in their numbers.

But the figures have slumped in the months since and barely 8,000 were there to see Dyer’s men stun Steven Gerrard’s team again on Wednesday.

The 2-1 win was Dyer’s third Ladbrokes Premiership win on the bounce but comes after a lengthy lull in which Clarke’s former number two lost his first five league games in charge.

Dyer fully understands some fans may not have the finances to come to every game – but he hopes Killie’s midweek triumph may persuade some that turning out for Sunday’s clash with Hibernian will be money well spent.

“It’s difficult,” he said. “It was a Wednesday night, it was live on the box. People have to work, they have to earn money.

“I don’t think when people get their wages every week they think about Kilmarnock all the time.

“I’m a realist. You’ve got to feed your family first.

“But then, coming here is enjoyment for some people and we were happy with the people who did turn out. It was a good number for a Wednesday night.

“Hopefully we get a bigger crowd on Sunday – but then again it’s on telly again, ain’t it?

“It’s just the way it is, people have priorities in life.

“We hope results like Wednesday’s helps bring some of those fans back.

“I want them to come, but I also understand if they can’t. If they have got TVs, then they can watch it on telly.”

Killie skipper Gary Dicker feels his side have turned the corner and hopes to see them claw their way back into the top six with a win over nearest rivals Hibs.

Dyer was asked to pick up the pieces after the club’s Angelo Alessio experiment flopped and has since been given the job to the summer.

Now Dicker is determined to help make that a permanent appointment.

“It’s big credit to Alex for coming in and steadying the ship,” said the Irishman.

“He has come into a situation that was quite difficult but he has turned it around.

“I’m delighted for the gaffer. It’s a hard situation to come into in your first role as manager and I think he’s handled it really well.

“He’s been under pressure straight away through no fault of his own.

“So I’m delighted with the turnaround. Alex has got a great relationship with the lads and he’s handled the situation well.

“I think he is ready and I do hope he gets the chance to lead the club forward but it’s up to us to get him the job.”