Klinsmann: Feilhaber didn't show he was on 'international level' | FourFourTwo

Klinsmann: Feilhaber didn't show he was on 'international level'

CARSON, Calif. — Jurgen Klinsmann could have expressed anger or disgust when asked about Benny Feilhaber’s recent scathing tirade aimed at the U.S. national team coach, but Klinsmann insisted that he could understand Feilhaber’s frustrations.

Not because he agreed with Feilhaber’s criticisms, but because, in Klinsmann's opinion, the player doesn't know any better.

Klinsmann didn’t shy away from explaining why Feilhaber hasn’t been called into the U.S. in two years, stating bluntly that he simply hasn’t shown enough in previous call-ups.

“We had Benny several times with us and he never had an impact in the moments he had the opportunity with the national team under my guidance,” Klinsmann said. “I cannot speak for (former coach Bob Bradley). Bob had his own experiences with him. Whenever he came in with us he never made an impression that made us say, 'This is international level.' It’s as simple as that."

Feilhaber rattled off a list of players he feels are deserving of call-ups who have been left out by Klinsmann, including Dax McCarty, Sacha Kjestan, Matt Hedges and Eric Lichaj. Klinsmann refuted any suggestion that those players are somehow not under consideration, and cited the fact that the current U.S. camp is split in half with Under-23 players as a reason why more MLS veteran standouts were not called in.

“If you look at this roster, we cut it in half, so that means half of the numbers that could have come into the camp were cut off,” Klinsmann said. “Do we look at Dax McCarty? Absolutely. Do we look at Sacha (Kljestan)? Absolutely? Do we look at Benny? Absolutely. I think Benny had a very good first part of the season, and then not so good second part. We look at the players over a longer period of time — Benny, as well as all the other ones.”

When asked about Feilhaber last summer, Klinsmann’s response was to simply state that there were other players ahead of him on the U.S. depth chart. On Wednesday, Klinsmann reiterated that message.

“They have their own perspective, but they need to ask themselves, ‘Who is my counterpart on the national team now? Who do I need to kick out?’” Klinsmann said. “Benny would need to kick out a Jermaine Jones, or a Michael Bradley, and now a Darlington Nagbe.” 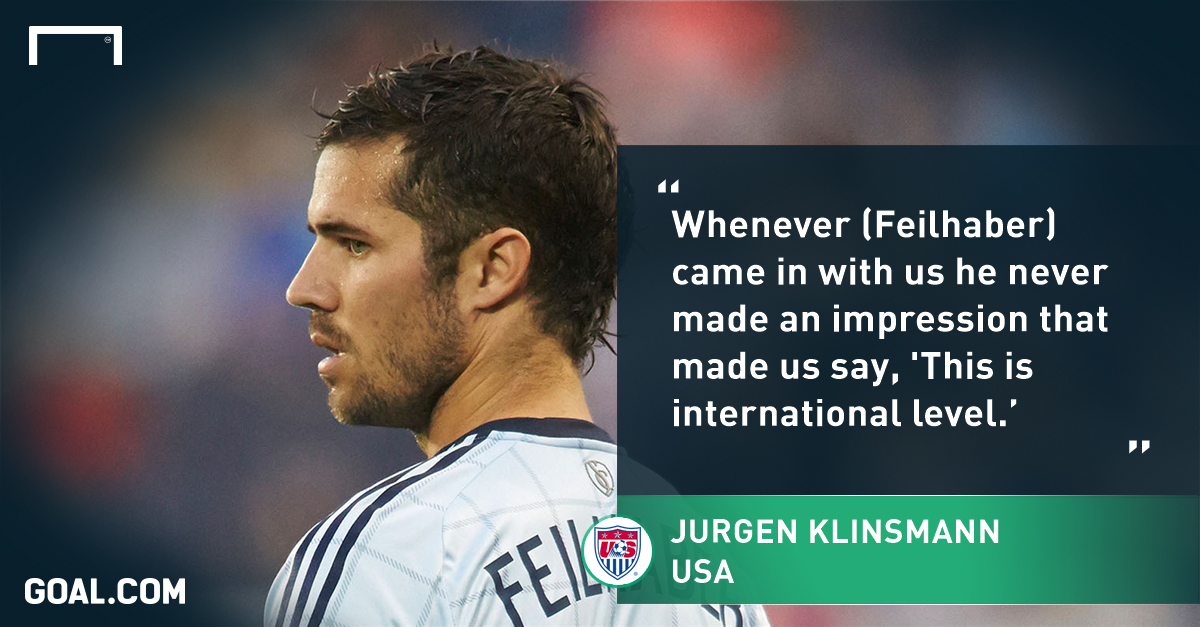 Though he wouldn’t say so directly, Klinsmann did make comments that seem to support the notion that part of the reason Feilhaber has been left out is because he isn’t seen as a good presence in the locker room.

“Everything plays a role in a decision,” Klinsmann said. “We explain to the players that there are so many pieces to it. Obviously the soccer piece is the biggest one, no doubt about it. You talk about the specific talent that he has. The strengths and weaknesses, the technical, tactical and physical aspects of the game.

But then there’s a big other picture,” Klinsmann added. “The other picture is the personality. The interaction with other players. The chemistry. The giver-taker discussion we’ve had in the past. All these things will get analyzed by us and you as a coach, no matter if it’s with a national team or club team, you want to develop the highest quality soccer team, as well as the highest energy-driven environment possible in order to go through a long year with your team to keep them going.

“All that plays a role when we evaluate the player, it absolutely plays a role. What role does this player play with his teammates? With his body language, with his expressions, with his reactions in training games, to give a little bit of background.”

Klinsmann also dismissed the idea that his decision to exclude certain players, either recently or earlier in his U.S. tenure, has been driven by emotion or a dislike for those excluded players.

"It’s just wrong because all the decisions that I’ve made have been to make the best out of the team, and to get the best situation in order to be successful,” Klinsmann said. “Aside from the Gold Cup, I feel we’ve been pretty successful."

He added: “There were never decisions where I personally have something against anybody. I always look at the big context of the team.”

Feilhaber isn’t the first player to publicly criticize Klinsmann for his player selections. In 2005, Germany defender Christian Worns bashed Klinsmann for leaving him out of the national team’s starting lineup. The German federation suspended Woerns from the national team, and he never earned another cap for Germany.

No stranger to being publicly criticized by a player, Klinsmann insists he isn’t upset with Feilhaber for his outburst.

“I understand the frustration of a player, but then down the road they will also understand why a coach will make a certain decision, and hopefully down the road, if they become a coach they will have a different perspective,” Klinsmann said. “It will be interesting to see when he will one day be a coach, and how he puts his team together, and how he would coach the young Benny.

“I don’t get upset with anything a player says when they’re disappointed, or a coach says that he sees other people who should be in a camp or not because that’s their own perspective from the outside,” Klinsmann said. “Again, he has no inside perspective. Zero, because he doesn’t know what the objective of the camp is. He doesn’t know how the team evolved over the last two years without him. And he doesn’t see what talent we have in the pipeline that’s next in line, especially with the Olympic team group.

“When it comes to a decision, pro or con, on a player, you make that decision based on the best interests of the team, not the best interests of the player,” Klinsmann said. “It’s a tough one. It’s a tough one for Benny, it was a tough one for Landon (Donovan in 2014) obviously, no doubt about it. Now players who feel like they should be in this camp, or feel like they should be looked at, will get frustrated and speak out. That’s fine.”

Klinsmann made it clear his door is open to Feilhaber or any player who wants to discuss his U.S. national team standing.

“I’m not hiding away from these talks,” Klinsmann told Goal USA. “If Benny wants to know why, no problem, I’ll lay it out for you — but you might not like it.”

England striker says he won’t stay at Tottenham “for the sake of it”.

England striker says he won’t stay at Tottenham “for the sake of it”.