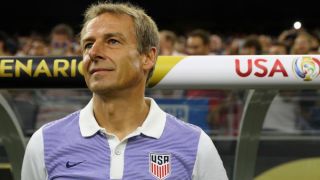 United States coach Jurgen Klinsmann insisted his team have nothing to be ashamed of after being outclassed by a "special" Argentina side in the Copa America Centenario semi-finals.

USA simply had no answer to Lionel Messi and Co. as Argentina eased into the decider with a comfortable 4-0 victory in Houston on Tuesday.

Speaking to reporters afterwards, Klinsmann had no complaints with his USA side, who were without suspended trio Alejandro Bedoya, Jermaine Jones and Bobby Wood.

"We saw tonight why they are the number one team in the world," Klinsmann said during his post-match news conference.

"You have to give them a huge complement. To Messi, Higuain and Mascherano. These guys are top class.

"I told the guys there's nothing to be ashamed of after the game. We move forward, we learn.

"We are very grateful to this Copa America that we are part of it and we made it to the final four.

"There is always a step backward and two steps forward. It's part of our process. I told the guys to keep their heads up and swallow it. Argentina are a special team."

USA's Copa America campaign, however, is not over, with the CONCACAF nation to face the loser of the second semi-final between Chile and Colombia in Saturday's third-place play-off.