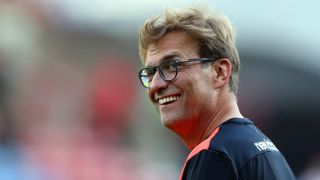 The 30-year centre-back completed a reported £4.2million move from Augsburg to Anfield on Wednesday and Klopp confirmed a man who first caught his eye during his time in charge of Borussia Dortmund was a prime target when he began planning for the upcoming campaign.

"At the end of last season I knew that if we decided to take somebody in this position he was the one I wanted," Klopp told the club's official website. "Now I'm really happy with the options we have got at centre-back.

"I've seen up close for three seasons how good his performances in Germany have been and last season we got chance to see him against us - and a lot in preparation - for our [Europa League] games against Augsburg.

"The last time he played against us at Dortmund they had 10 men and he defended really well to help them get a clean sheet and a win.

"He has had chances to move to some very big clubs but showed loyalty to Augsburg and now we've beaten some big teams for him to come here."

The admiration is mutual, with Klavan citing Klopp as a key factor in him deciding to take the plunge in the Premier League.

"He [Klopp] knew me when I played in the Bundesliga from when he was still there and when I heard about this chance to have multiple good things together, to represent Liverpool and work with Jurgen Klopp, I didn't doubt in my mind that something really, really good would come out of it," he said.