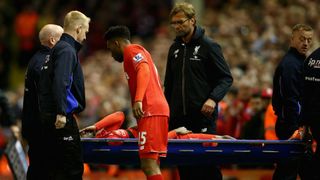 Liverpool manager Jurgen Klopp confirmed Divock Origi did not suffer an ankle break in the side's 4-0 win over Everton on Wednesday.

Origi was taken off on a stretcher early in the second half at Anfield after a crunching tackle by Ramiro Funes Mori, which saw the Everton defender receive a straight red card.

It was initially feared Origi had suffered a serious injury, but Klopp revealed the Belgian's ankle is believed to be just twisted and not broken.

"I would like to say yes, I am delighted [about the win], but the injury to Divock Origi has cost me some joy," the German said.

"I can't say too much about Origi but they say it is disgusting, awful pictures.

"But it's not broken, it is a twisted ankle, he is on crutches walking around so we will have to see.

"When you want to have success you need luck with injuries. Seeing him on the floor is not too nice so I couldn't enjoy the second half too much."

Origi opened the scoring in the 43rd minute to score his fifth goal in as many games, with Mamadou Sakho, Daniel Sturridge and Philippe Coutinho rounding out the result.

Klopp added: "Beating Everton is a special thing. Four-nil against Everton, if you told me before the game I would take it but now it is spoiled by the injury."

Liverpool host Newcastle United on Saturday before travelling to Spain for their Europa League semi-final first leg against Villarreal.