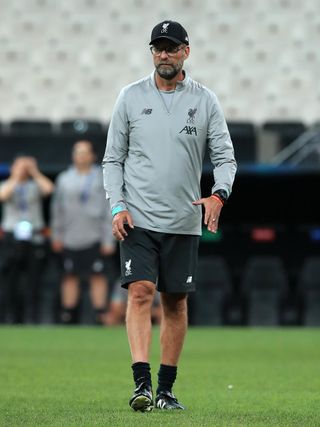 Besiktas Park will witness the first all-English clash in the competition’s history on Wednesday, when the Reds will attempt to secure more continental glory in this Turkish metropolis.

Istanbul will always have a special place in the hearts of Liverpool supporters after the Champions League final in 2005, when Rafael Benitez’s side came from three goals down to secure a 3-3 draw with AC Milan before winning on penalties.

“I know about the special importance of Istanbul and what a special place it is for every Liverpool supporter,” Klopp said on the eve of the game.

“It was 2005 in Istanbul and no one will ever forget that, which is good.

“But we are different people. Unfortunately, we are not the same, we are now in the team 2019-20 and that is a pretty good one as well.

“Istanbul is always a good place for football. I played here once with (Borussia) Dortmund against Galatasaray, and the atmosphere was brilliant until we calmed it down with the result.

“If I am right there is a big community of Liverpool supporters in Istanbul and Turkey as well, so that will make it special for us and it is everything it should be – apart from the flight which was three-and-a-half hours.

“Both teams are here now, we are both fresh, we both want to play and I hope we can make this a special place for ourselves.”

Frank Lampard is determined to secure his first win as Chelsea manager and finally lift the Super Cup.

Just days after his first match in charge ended in a galling 4-0 defeat at Manchester United, the Blues’ all-time top scorer will attempt to mastermind victory in Istanbul.

Chelsea secured their place in the Turkey showpiece by winning the Europa League under Maurizio Sarri and successor Lampard, drawing on his playing days, said: “It means a lot to the club. I know first-hand because we lost two!

“We lost to Atletico Madrid in poor circumstances (in 2012) and we were far, far off and gave them the Super Cup.

“We were unfortunate to lose to Bayern Munich (in 2013). When you work hard to get into this game between two champions, it is important that at a club like Chelsea we give everything to win it.

“It does mean something. It means something to us as a club because it is another trophy.

“And for me it would be a really nice start for me personally, but more than that a really good feeling for the players with the season coming up that we can compete with Liverpool.”

“I hope it serves as an example to female referees, and to any young girls who may aspire to be a referee.”— UEFA (@UEFA) August 13, 2019

Stephanie Frappart will make history when she becomes the first female official to take charge of a major UEFA’s men competition showpiece.

Frappart will be assisted by Manuela Nicolosi and Michelle O’Neill of the Republic of Ireland, just as she was for the Women’s World Cup final between the United States and Holland.

“Of course we feel ready,” the 35-year-old said. “We train a lot, all the time, we’re not afraid of this game as we’re always ready for all the games.