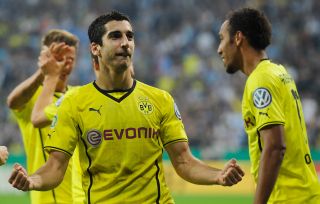 Klopp's side were frustrated by 1860 Munich – and the woodwork – inside 90 minutes, as it ended goalless, but strikes from Pierre-Emerick Aubameyang and Henrikh Mkhitaryan won the game in extra time 2-0.

"We must and can win tough games," said Klopp. "We had four great opportunities and hit the post and the crossbar.

"They (Munich) defended very deep, which is not easy for any team.

"If we had scored early it might have been different."

The introduction of Aubameyang sparked Dortmund - who took 15,000 fans with them for the clash - into life and he had a hand in both goals.

When Dominik Stahl brought the midfielder down inside the penalty area just before half-time in extra time he was sent off, and Aubameyang converted the penalty.

Jonas Hofmann provided a perfect assist for the second goal in the 108th minute after a surging run from his own half. He found Mkhitaryan and the Armenia international calmly side-stepped Gabor Kiraly and rolled the ball into the empty net.

Elsewhere, Bayer Leverkusen had fewer troubles against second-division Arminia Bielefeld as they recorded a 2-0 win.

Son Heung-Min opened the scoring for the visitors in the 62nd minute, with Sidney Sam sealing the win in the closing minutes.

There were also wins for Hamburg, who secured a 1-0 victory at home to Greuther Furth, and Wolfsburg, who beat Aalen 2-0.

Second division Cologne caused the upset of the night as they beat Bundesliga side Mainz 1-0.

Marcel Risse's strike just before the hour was enough to seal their victory and put them into the next round.

Hoffenheim were made to wait before they could book their third-round spot after a goalless 90 minutes against Energie Cottbus, before they scored three times in extra time with goals from Niklas Sule, Roberto Firmino and Sven Schipplock.

Augsburg had no problems against third division Preussen Muster, winning their away tie 3-0, while second division Sandhausen came from a goal behind to beat fourth tier Widenbruck, who finished with 10 men after Massih Wassey was sent off for a second bookable offence, with the game ending 3-1.