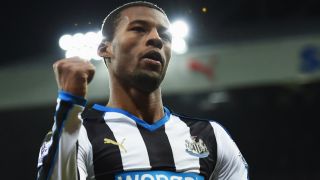 The Netherlands international midfielder scored 11 goals in 38 Premier League appearances last season, with Klopp revealing he has been following Wijnaldum since his youth days at Sparta Rotterdam.

Klopp said a conversation with the 25-year-old was enough to realise he would be a perfect fit at Anfield.

"He was captain of PSV Eindhoven, the Dutch champions. At this young age, being the captain of a team doesn't happen too often," the German told Liverpool's official website.

"[The conversation] was good. We both felt pretty good after the talk. Before, it's like one piece of the whole cake, but after this talk we were both convinced we wanted to do it."

Klopp revealed he did not watch much of Wijnaldum last season, but had seen enough of the midfielder in his early years as a footballer.

"I have known him since he was a youth player at Rotterdam. I like watching players and following their way," he said.

"Last year I had no opportunity [to watch him] because I had no club, and then he made the transfer to Newcastle.

"Actually I didn't know in the first place that he played there. When we played against them, it was like 'Oh, there he is'. Last year I didn't watch him too much but I never forgot how well he performed at Eindhoven and as a very young boy in Rotterdam. That was quite impressive.

"For him, it's quite easy. He is a midfield player in different positions, especially the centre, but the biggest difference to a lot of others is he can play on the wing too. Together with our other players, for sure he will help us."