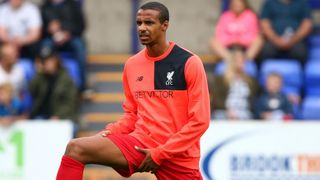 Liverpool boss Jurgen Klopp does not believe the foot injury that caused Joel Matip to limp out of Sunday's 2-0 friendly win at Wigan Athletic will prove to be a serious setback.

Second-half substitutes Danny Ings and Ben Woodburn were on target for Klopp's side who finished the match with 10 men as a result of Matip's departure.

The 24-year-old, who is a close-season arrival from Bundesliga side Schalke, has previously been troubled by the same complaint and his manager is hopeful he will resume training next week.

"I hope it's only a minor problem," Klopp told a post-match news conference. "He said he's had it one or two times already.

"It's the foot he had problems with in the past and then he had a little bit of pain when pre-season started because of the intensity.

"He's used to it. Hopefully it is like this [not serious] because everyone can see he's in a real good way. I think tomorrow he'll rest, then he can go again."

Klopp added: "It's not too serious, hopefully. We had to make the decision of Joel or Dejan [Lovren], who has to play the whole 90 minutes?

"We decided on Joel. For him it was a little bit too much but he is in a good way, as you can see."

Klopp was satisfied with Liverpool's performance overall, even if he conceded the conclusion to the first half was not the most riveting spectacle.

"It was a good first 30 minutes and then there was a little break in the game, we lost the formation – too big spaces – and they could play a little bit," he said.

"I told the boys that I have seen a lot of games in my life and a few of them were more exciting than our first half, especially the end of the first half. But it was okay.

"I saw a lot of good things, creating chances. Wigan had a good formation obviously and they have been in training a week longer, I know this."