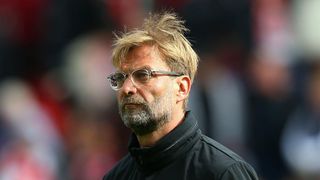 Liverpool manager Jurgen Klopp believes his side could have won all of their first five Premier League games this season, despite coming out on top in only two of them.

A 1-1 draw against Burnley at Anfield left the Reds without a win in their last three matches in all competitions and they face a gruelling schedule of away matches in the League Cup, Premier League and Champions League over the next few weeks.

Mohamed Salah's 30th-minute goal ensured the points were shared against Burnley, who took the lead three minutes earlier through Scott Arfield, and Klopp attempted to ease the concerns of supporters who are still reeling from Liverpool's 5-0 defeat at the hands of Manchester City in their previous Premier League outing.

"We have quality and now we have to use this quality consistently, that should be the plan," said Klopp.

"We still have space for improvement, that was clear before the season, but we could have won pretty much all our games so far when you think about the performance.

"That's a very important thing, so we have quite a good form or shape. We didn't win all of them and we lost one [to a] really high [score], but everyone who was there [saw it was a] strange game – it was not that we performed from the first second like you would imagine when somebody loses 5-0.

"Yes, we have to improve, but [there are] a lot of really positive things. Unfortunately, I still don't feel any positivity in this moment, I am still in the 1-1 mood, but it is easy to see all the positive things from tomorrow on again. They are there."

Liverpool travel to Leicester in the EFL Cup on Tuesday and then again in the Premier League on Saturday, before playing away at Spartak Moscow in the Champions League and then returning to league action at Newcastle United.

Klopp insisted he is optimistic about his side's chances of taking points from a difficult run of games, saying: "Now we go to Leicester, Leicester again, then we go to Moscow and then Newcastle and if we can keep the shape and improve the other things, I think everybody has seen already we can be really strong.

"We have to be strong, I know that, but we really can be strong."