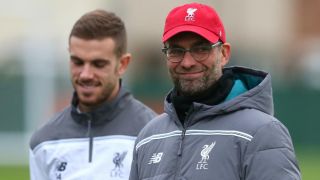 Jordan Henderson has rubbished claims Liverpool's recent injury woes are down to the training methods of manager Jurgen Klopp.

Several of Liverpool's starting players have picked up muscle injuries in recent weeks, leaving Klopp with a thin squad to choose from.

However, Henderson stressed the side have not even trained enough due to their intense schedule over the past two months to pick up training ground injuries.

"I don't buy it at all, to be honest," the Liverpool skipper told the Daily Mail. "The amount of games that we have had, you cannot train that much.

"It's more mentally that [Klopp] tests you. He wants you to take on board what he wants from you tactically.

"He wants you to know exactly what he wants from you when he sends you on to the pitch. But I honestly don't see how you could [say] it is because of training that all those injuries have come about.

"We haven't trained enough for them to happen."

Liverpool are preparing for their League Cup semi-final return leg against Stoke City on Tuesday, with the Merseyside club holding a 1-0 advantage, and Henderson is targeting his first piece of silverware as captain.

"This is crucial," he said. "Especially when you think of what happened against Aston Villa last season in the FA Cup semi-final. We didn't do ourselves justice, by any means.

"We need to get back to Wembley and put that right. We want to taste what it feels like to win a trophy."