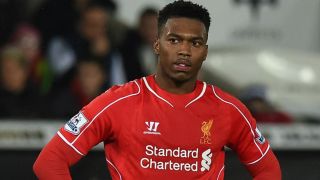 Jurgen Klopp is undecided on whether he should use Daniel Sturridge when Liverpool take on Premier League leaders Manchester City at the Etihad Stadium on Saturday.

The England international has missed the past seven matches after suffering a knee injury, but returned to full training on Tuesday.

Liverpool are in need of a boost after slipping to 10th in the table, but Klopp suggested he was reluctant to take any risks with Sturridge, who has regularly struggled with fitness setbacks during his Anfield career to date.

"He is as good as he can be after the long break," Klopp said of his striker.

"He has trained with us but of course he is not 100 per cent yet. I will decide this on Friday. He has been out for five weeks and hasn't trained much.

"I think Thursday was only the third full exercise with the team although as a striker, sometimes, five minutes are enough. I will have to see and think about it after the press conference.

"He has to train now, that is for sure. For four and a half weeks, he could not train. No cycling or running.

"But first of all, he is on five year contract, everyone wants to see more of him but we have to find the right balance and we will see.