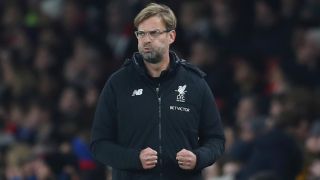 Liverpool manager Jurgen Klopp has urged his side to "strike back immediately" following the setback of a defeat to Swansea City.

The Reds were beaten 1-0 at the Liberty Stadium on Monday, ending an unbeaten run of 18 matches in all competitions stretching back to the 4-1 loss to Tottenham in October.

Roberto Firmino hit the woodwork in the dying seconds but Klopp says he would not have been pleased with the performance even if his side had managed to cancel out Alfie Mawson's goal five minutes before half-time.

Instead, he has challenged his players to get back on track as soon as possible, with an FA Cup clash with West Brom looming on Saturday before a trip to Huddersfield Town on Tuesday.

"If you take a point, yes, we have a longer [unbeaten] run but it doesn't make the game better. That's what we have to think about," Klopp told Liverpool's official website.

3 - Jurgen Klopp has lost more Premier League games against than he has vs any other side in the competition. Clipped.January 22, 2018

"I don't forget that the boys delivered in the last few weeks and months but, for the moment, it doesn't help. We need to feel both – it's not about thinking about what we did well. We need to deliver all the time, we know that, and we didn't deliver.

"It's hard work on a night like that, Swansea fighting for their life. I don't expect free-flowing football.

"The last situation was maybe the clearest one. We threw everything in their box, to be honest. We nearly used it but it doesn't make the game better.

"No points or one point is maybe a big difference at the end but now, again, we have to strike back immediately. That's what we will do."