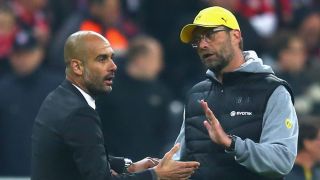 The Bayern Munich coach has already announced he will leave the German giants at the end of the season with the intention of testing himself in the Premier League.

There is no shortage of interest in Guardiola's services, with Manchester City favourites to hire the Spaniard, while Manchester United are also rumoured to be in the hunt, with manager Louis van Gaal's future the subject of considerable speculation.

The German has learned the hard way just how hectic the fixture list can be in England, with Liverpool still fighting in the FA Cup and Capital One Cup - having beaten Stoke City 1-0 in the first leg away from home - as well as the Europa League and Premier League.

Klopp's Liverpool narrowly avoided an embarrassing defeat against lowly Exeter City in the FA Cup third round on Friday, a 2-2 draw forcing a replay and yet another match for his injury-ravaged team to cope with.

"In Germany, when you tell people about the FA Cup that if you draw you play again they say: 'What?' Here you have penalties and extra-time, but only after the second game. That's the thing, the number of games – football, football, football," Klopp said.

"With a perfect pre-season you are prepared for a long, long journey. We knew about it, but to feel it is different. Pep is so experienced, for sure. I'm sure he will buy a few players and have a good team, have 35 players or whatever!

"What I can say about here is very positive. It's a great country, great people, the food is much better than everybody said and the weather is not great, like everyone said."