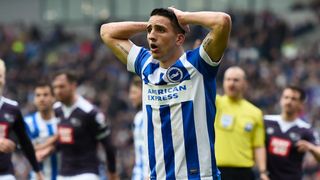 Former Leicester City midfielder Anthony Knockaert insists he is not jealous of his former team-mates success after leaving the club following a falling out with ex-manager Nigel Pearce.

Knockaert rejected a new contract at Leicester during the off-season due to his relationship with Pearson, before taking his chance at Belgian outfit Standard Liege, who eventually sold him to promotion-chasing Brighton and Hove Albion in the Championship.

And while the 24-year-old focuses on getting Brighton promoted to the Premier League with a big performance in their play-off match against Middlesbrough, his former team-mates are celebrating a historic title, even though Pearson did not last the off-season and was replaced by Claudio Ranieri.

"I spoke to Riyad Mahrez this week on the phone and I talk a lot with Steve Walsh, the scout," Knockaert told the Daily Mail.

"I have great friends there. I am delighted for Riyad, for that unbelievable club, for everyone there, players like Andy King who came through the whole way with the club from League One.

Knockaert said he rejected the chance to continue at Leicester because he felt he was poorly treated upon the club's return to the top flight, having played such a crucial role in their promotion to the Premier League.

"I loved it there but I didn't deserve to be treated how I was last season in terms of playing games," Knockaert said.

"I thought I deserved better. That is why I wanted to leave.

"I had a very good relationship with the manager but it was hard last season. I think I was better than what I had.

"What I showed in Championship the year before should have meant more games to me last year.

"I thought I had the quality to play. But he [Pearson] didn't give me three games or four games [in a row] to show what I can show. Sometimes 15 minutes in a game, sometimes 10 minutes. But this is football."