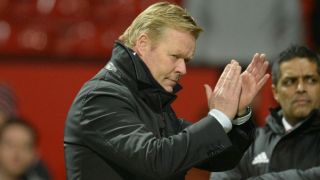 Ronald Koeman felt Southampton preyed on Manchester United's unease in front of their own fans as they claimed a 1-0 win at Old Trafford.

Having won by the same scoreline in last season's corresponding fixture, Koeman's men were jubilant once more after debutant Charlie Austin came off the bench to head an 87th-minute winner.

United were jeered at half-time and, more vociferously, when the final whistle sounded – the home faithful frustrated by a performance almost entirely devoid of creativity and attacking intent.

"Of course, it's a great win. It was a difficult game for both teams today. We knew they are under pressure," Koeman told a news conference.

"If you keep the organisation of your team during the game [United] will be nervous.

"Defensively we did a great job. Attacking wise, in the first half we didn't play well because we had some counter-attack movements and we didn't create – maybe one chance from Sadio [Mane].

"We didn't play well in that aspect of football but the rest was good enough to get a result in the game and until the end of the game we knew we had qualities in our set-piece and that made the difference.

"We did a great job, in our team organisation. We had great spirit, we had belief and that makes the 1-0 today."

The Dutchman hailed the former QPR and Burnley striker's goal-poaching qualities but was also keen to credit a battling collective performance.

He added: "I mentioned to Charlie when he came on the pitch - it was a corner or a free-kick, 'okay go to the box, make a good header and it's 1-0'.

"It wasn't at that time but later on, yes [he scored]. That is why we wanted to sign Charlie Austin – great numbers of goals.

"He showed it in the last 10 or 15 minutes but it is not fair to talk about just one player because the team worked so hard."