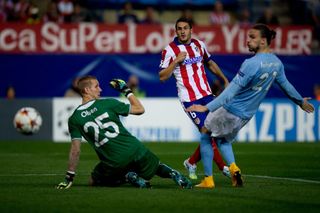 After a frustrating first half in which a number of chances were spurned, the Spian international opened the scoring for Diego Simeone's men from close range and the floodgates opened.

The midfielder's influence grew as he crossed for Mario Mandzukic to score the second, fed Antoine Griezmann for the third and Diego Godin headed in his corner for a late fourth.

Alessio Cerci rounded off the scoring in injury time and while admitting frustration at trying to break down Malmo's defence, Koke believes last season's finalists Atletico should look to progress as swiftly as possible.

"We have to go and win our remaining games to avoid relying on others. We have six points, we're at the top and that's what's important," Koke is quoted by AS.

"We tried in the first half but they didn't give much space. We tried with a lot of crosses and we had bad luck when Griezmann hit the crossbar.

"We tried to score from close range, from distance, in the end we worked hard and I was lucky to score the first, and from there the goals came."

Frenchman Griezmann was making his first Champions League start and missed a superb chance in the first half when he rattled the bar after latching on to Arda Turan's measured pass, but he got his rewards after the interval with a finish that bounced in off Malmo goalkeeper Robin Olsen.

And Griezmann admitted that it was exactly what he needed.

He said: "Actually, I needed a game like that and a goal.

"It's a shame about the shot in the first half that hit the bar but we've achieved an important victory, we have six points and we have to keep improving."