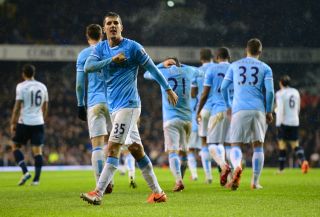 The Montenegrin attacker has endured an injury-hit start to his career at the Etihad Stadium following a close-season move from Fiorentina.

However, after returning to fitness, Jovetic has appeared in his club's last three games as a substitute and scored his first Premier League goal in the 5-1 thrashing of Tottenham on Wednesday.

City saw Sergio Aguero limp off at White Hart Lane with an apparent hamstring problem, paving the way for Jovetic's arrival, while fellow forward Alvaro Negredo remained on the bench after injuring his shoulder in the second leg of the League Cup semi-final against West Ham.

Yet Kompany remains confident that Manuel Pellegrini's men, who have scored an astonishing 115 goals so far this season, have sufficient options with Jovetic available once again.

Commenting on the setback for Aguero, who only recently overcame a calf problem, the captain told City's official website: "He's a massive player for us - at moments it was frightening just how good he was.

"You need those players, especially in the games we have coming up, but ultimately we recover an incredible player as well, which is Jovetic.

"Not much has been said about him because he's been injured for such a long time, but when he is on the pitch you can see he has real added value.

"Negredo will come back and obviously we've had to deal with the situation when Sergio was out for a month. We seem to step up whenever we need to at the moment and I just hope we keep doing that."

City have demonstrated sensational form over the last 10 weeks, winning 18 games in a 20-match unbeaten run across all competitions and frequently dishing out thumping defeats.

Remarkably, Kompany maintains there is still room for improvement.

"We have a very good balance but, you may think I'm being a bit difficult here, whenever we go three- or four-nil up I do think there is always five or 10 minutes where we drop off a little bit," the Belgian added.

"If we are capable of maintaining instead of dropping off in those moments we can be that team everyone thinks we can be.

"There is still work (to do) - we recognise it - but we do the right things in training."