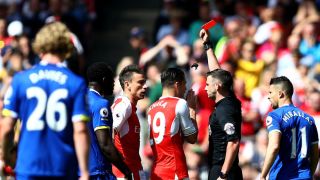 Arsenal captain Laurent Koscielny will miss next weekend's FA Cup final against Chelsea after receiving a straight red card on the final day of the Premier League season against Everton.

Arsene Wenger's side took an early lead through Hector Bellerin to boost their hopes of replacing Liverpool in the Champions League places, but Koscielny recklessly lunged in on Enner Valencia to leave his team-mates with a tough afternoon in prospect.

Along with the showpiece showdown against Chelsea, Koscielny can also expect to miss Arsenal's first two domestic games of the 2017-18 campaign.

The France centre-back was also sent off during the second leg of Arsenal's last-16 Champions League clash with Bayern Munich this season as they went down to a 10-2 aggregate loss.

Despite their numerical disadvantage, Alexis Sanchez doubled the Gunners' lead against Everton before the half hour and victory will secure fourth spot at Liverpool's expense unless Jurgen Klopp's men are able to overcome relegated Middlesbrough.