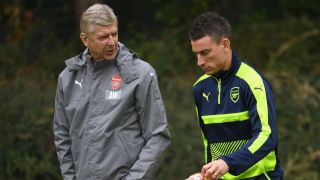 Laurent Koscielny admits the uncertainty over Arsene Wenger's future at Arsenal has created a "difficult situation" for the Gunners this season and has urged Alexis Sanchez to commit himself to the club.

Wenger's critics have been sharpening their knives during a season that has produced another failed bid for the Premier League title and capitulation in the Champions League last 16 against Bayern Munich.

The Frenchman has never failed to qualify for Europe's premier competition during his 20-year tenure at Arsenal, but they have to win their remaining two league matches and hope for a slip-up from Manchester City or Liverpool to continue that proud record.

And with Wenger remaining non-committal over whether he will still be at the club next season, centre-back Koscielny says it has been tough.

"It is a difficult situation when you don't know what is happening with the boss but you are professional," he told Sky Sports.

"We are players of this club and we just want to have the best results, not to think about our situation or the situation of the boss.

"We are all in the same boat and the top thing is Arsenal. Maybe some players don't feel great but we need to be focused on our job and not worry about Arsene.

"For me, he is a person I like a lot. He is a big part of my life and my career, so I have a lot respect for him. I can't say anything about him, just nice things."

Sanchez's long-term future at Emirates Stadium is also in doubt, with the Chile superstar set to enter the final year of his contract and reportedly frustrated at Arsenal's failure to land major trophies.

But Koscielny is desperate for the former Barcelona man to stay put.

"Firstly, he [Sanchez] scored a lot of goals for us but his first job is not to be a striker, it is more midfield but he is an unbelievable player. He just wants to fight and have the best result for the club," he added.

"Sometimes he is disappointed with the result of our game but he knows that we just want to fight for each other and for the club. When you have a player like this in your team, to show the way we want to grow together, it is important and I think he has a lot of players behind him to keep him.

"I don't think there are a lot of players like him and a player like this who can be the difference during the game, it's rare. We want to keep him with us because we know he is so important for our team."