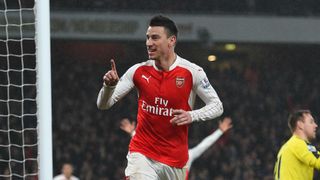 Arsene Wenger says Laurent Koscielny reminded him of Italian defender Fabio Cannavaro when he first saw him playing for Lorient.

Arsenal were widely perceived to be taking a gamble when they paid £9.7 million to bring the Frenchman to North London in 2010.

But he has proven to be a good acquisition, having made more than 200 appearances for the club in all competitions and impressing again as the Gunners challenge for the Premier League title this season.

"I saw him first playing on TV for Lorient and straight away I was struck by his quality, focus, mobility and pace," Wenger said.

"Not too tall, but very mobile, read the game very well and had great interception qualities.

"I was told by a friend of mine who was his coach a few years earlier that he was a quality player, so I kept an eye on him."

Wenger was concerned by the former Guingamp man's aerial abilities, but said the 30-year-old has improved since arriving at the Emirates Stadium.

"I felt that the only question mark for him coming to English football would be dealing with the ball in the air," he said.

"But he's slowly getting there."

Koscielny has been a key part of the Arsenal defence that has conceded only 18 league goals so far this season, making 25 appearances in all competitions and also chipping in with three league goals, including the winner against Newcastle last weekend.