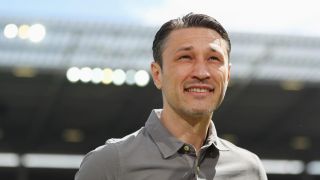 Borussia Dortmund are favourites for Saturday's DFB-Pokal final but Eintracht Frankfurt coach Niko Kovac has pledged his side will "throw everything" at their opponents in a bid to claim the cup.

Kovac's men are clear underdogs for the Berlin showpiece, with Dortmund having featured in the final in each of the last three seasons, although they lost on all of those occasions.

The boss accepts the odds will be against his side at the Olympiastadion but insisted Eintracht will not be overawed by playing in the final.

"Dortmund are better than us at football," Kovac told reporters on Tuesday. "But we also have other virtues. We will not make it easy for them and will throw everything at them.

"On paper we are outsiders. But in a game everything is possible. We're going to Berlin with self-confidence.

"Training before the game will be the same as always. It does not make any difference. The whole club will accompany us to Berlin. All injured players will come along."

While Kovac represented Croatia as a player, he was born in Berlin and the 45-year-old is excited to return to his hometown for the showpiece.

"I am happy to come back and meet many friends as well as my family," Kovac added. "This makes this game a bit more special for me.

"This is something special for everyone, not just for the players, but for the whole club and the fans.

"I find it very difficult not to think about the final. Who knows if we will ever again participate in a cup final.

"Dortmund really have only strengths and no weaknesses. We have to concentrate on ourselves."

Kovac expects Jesus Vallejo and captain Alex Meier to both be available for the final and he is hopeful over the fitness of Slobodan Medojevic and Andersson Ordonez.