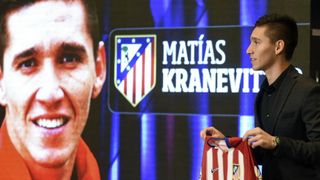 Matias Kranevitter hopes to make an instant impact at Atletico Madrid and insists he is ready to play in the Copa del Rey clash with Rayo Vallecano.

The Argentina international agreed a move to the Vicente Calderon in August, but remained with River Plate in order to participate in the Club World Cup, where they suffered a 4-0 defeat in the final against Barcelona.

Kranevitter and fellow new signing Augusto Fernandez, who joined from Celta on January 1, took part in their first training session with Atletico on Monday

The 22-year-old, who will wear the number eight shirt for the Madrid club, was delighted to have linked up with his new team-mates and has quickly moved to put himself at Diego Simeone's disposal for the Copa del Rey last-16 match on Wednesday.

"I am already able to play and I have the confidence of the coach and of my team-mates. If I play against Rayo I will give my maximum because it is an important game," Kranevitter said.

"I am always eager to play, but I'm under the orders of the coach, and he is the one who decides [who plays].

"I am very happy to have joined a club like this – I really wanted to come. This is a unique opportunity that I have to make the most of.

"As the days go by I'll adapt to the game and will bring and willpower. I will try to learn from people with experience in the team.

"Simeone is a winner and has done very well at Atletico. It's a great honour for me that he has signed me.

"What caught my attention most is how happy and close-knit the group looks. This is why the team is doing well on the pitch."

Atletico sit top of La Liga, two points clear of champions Barcelona, who have a game in hand.