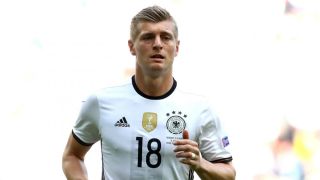 Toni Kroos has rejected talk of a return to Bayern Munich but is not willing to dismiss the possibility of leaving Real Madrid.

Kroos' future in the Spanish capital has been the subject of speculation in recent weeks after his starring role for Germany at Euro 2016.

A switch back to Bayern to link up with his former Madrid coach Carlo Ancelotti had been touted, but the midfielder is adamant a return to the Bundesliga is unlikely.

"I ruled out quite a while ago playing for a club in Germany again and this is still the case," he told Sport Bild.

However, the possibility of a move away from the Santiago Bernabeu has not been discounted by the 26-year-old, with Pep Guardiola's Manchester City also linked.

"We're in a tournament here where my total focus is on the semi-finals," he added when asked about City's interest.

"You know that you should never rule anything out in football, but I enjoy a great deal of respect from Real."