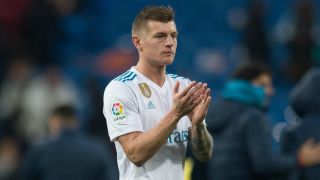 Toni Kroos insisted Real Madrid have to focus on finishing fourth in LaLiga and qualifying for the Champions League following Saturday's shock loss to Villarreal.

Madrid conceded with three minutes remaining as Villarreal upstaged the struggling Spanish and European champions 1-0 at the Santiago Bernabeu.

The result left Madrid fourth and 16 points adrift of leaders Barcelona, who could extend that advantage to 19 with victory at Real Sociedad on Sunday, and only a point ahead of fifth-placed Villarreal.

"We have to focus on qualifying for the Champions League next season," Kroos told BeIN Sports USA. "We have to think about our current position.

"I think this should be our goal for the remainder of the season."

It’s true that this is a difficult time for us and all Madridistas. But everybody who says we played a bad game today has no idea of football. It was a good performance and we have to continue. Still a lot to win this season!January 13, 2018

"Sixteen points is very far away and now isn't the time to think about anything other than the next game," Germany international Kroos said. "We have to start gaining points once more.

"This will allow Real Madrid to get closer to their goal of finishing inside the top four."