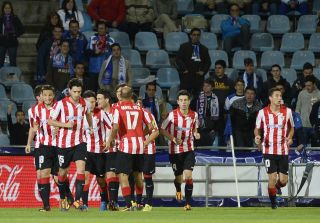 The Basque club earned all three points when French defender Aymeric Laporte found the back of the net on eight minutes at the Coliseum Alfonso Perez.

Laporte rose highest from a Susaeta corner to power home the game's only goal, and send Bilbao fifth on 19 points - just one behind the Champions League-placed Villarreal.

Diego Castro had a gilt-edged chance to equalise for Getafe from the penalty spot on 44 minutes.

Adrian Colunga was attempting to turn inside the area when he was collected by Bilbao defender Carlos Gurpegui, and referee Jesus Gil pointed to the spot.

But Bilbao custodian Gorka Iraizoz was up to the task, and parried Castro's effort wide with his left hand to deny the hosts.

Bilbao made it successive clean-sheet wins, while for Getafe, it was their first loss in six in all competitions as they slipped to sixth on 16 points.