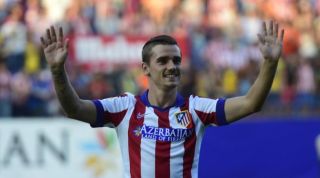 In a close-season that saw the likes of Diego Costa, Filipe Luis and Thibaut Courtois leave the Spanish champions, Griezmann's signing was billed a coup for Atleti.

The 23-year-old was a consistent performer for Real Sociedad prior to his move, but has struggled since switching clubs.

Wednesday's goal in a 5-0 UEFA Champions League rout of Malmo was just his second of the season - neither of which have come in the league.

It is a far cry from Griezmann's 16 in 35 Liga appearances for Sociedad last term, but coach Diego Simeone made special mention of the France international's efforts after the Malmo win.

And Griezmann - who felt he "needed" a goal - wants to build on that performance and break his Liga duck at Getafe on Sunday.

"I needed a game like that and a goal," Griezmann is quoted as telling AS.

"It's a shame about the shot in the first half that hit the bar but we've achieved an important victory.

"We have six points [in the Champions League] and we have to keep improving.

"We're top with Olympiacos but we have to keep the same, with the same intensity. We've taken an important step [though]."

Koke, Mario Mandzukic, Diego Godin and Alessio Cerci all scored in the big win over the Swedish side that highlighted Atletico's attacking strengths.

Simeone's men have now netted in 10 successive matches and will hope for a draw in Saturday's much-anticipated El Clasico between leaders Barcelona and Real Madrid.

Atleti sit five points off the pace in fifth, but may miss Tiago with a thigh problem.

Getafe have risen to 10th following an unbeaten run of three that has seen them defeat both Malaga and Real Sociedad.

That win at Sociedad last time out is sure to lift morale.

Getafe will not have happy memories of matches at Atletico, though, having lost their last five in all competitions.

That includes last season's 7-0 hammering the champions dished out, in a match that saw Getafe finish with 10 men.