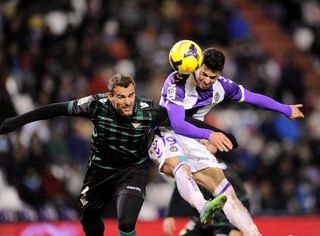 Following Friday's stalemate, Juan Ignacio Martinez has seen his side avoid defeat in their last five home league games as they closed the gap between themselves and Malaga to two points.

Valladolid, who remain in 18th place, fell behind to Victor's first-half header as the visitors looked to keep their hopes of European qualification alive.

However, Javi Guerra's strike seven minutes after the break ensured the spoils were shared.

The visitors, unbeaten in six La Liga games prior to kick-off, went ahead through Victor after 25 minutes, as the former Real Mallorca man registered his first goal for the club.

The forward, who arrived at the club in January, got on the end of Andreas Ivanschitz's free-kick from the left to head powerfully past Diego Marino.

However, early in the second half, Valladolid drew level through a goal the visitors will feel they could have dealt with better.

Guerra's shot found its way through a crowd of Levante defenders and nestled in the far corner of Keylor Navas' goal as Valladolid recorded their 10th draw of the La Liga season - more than any other side in the division.

Levante now sit seven points off Villarreal and Real Sociedad, who occupy the UEFA Europa League spots, with the pair due to play on Monday and Saturday respectively.