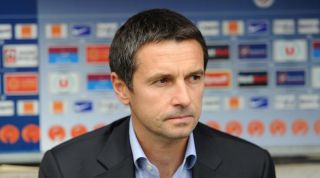 Last weekend's 5-1 defeat to Montpellier led Garde to suggest that he position was under threat.

Two Ligue 1 managers have already parted company with their clubs this season, with Eric Hely resigning from his post with Sochaux and Daniel Sanchez sacked by Valenciennes.

However, Lacombe, who serves as an advisor to Lyon president Jean-Michel Aulas, insists that the club have no plans to relieve Garde of his duties.

"He said he was in danger because that is the case for all coaches who do not win," Lacombe told L'Equipe.

"But everyone knows that this is not the case – we're all behind him.

"We knew that this period would be difficult, because for three years, we have lost a lot of players.

"I support Remi because I have a lot of respect for the man and the coach."

Lyon will attempt to turn their form around after the international break, when they host Bordeaux a week on Sunday.