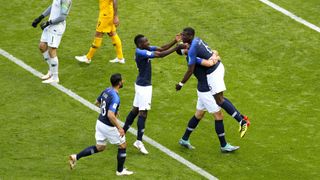 When little goes your way, sometimes you just need a slice of luck to secure a change of fortunes - just ask Paul Pogba after France's late 2-1 win over Australia in their World Cup opener.

Pogba's World Cup preparations were hardly ideal, as he went into France's pre-tournament friendlies on the back of a difficult and tumultuous season and then faced further scorn.

The criticism reached its peak during the 3-1 friendly triumph over Italy at the start of June, as the Manchester United man was booed off by France fans.

The pressure was on Pogba to take things by the scruff of the neck and silence his doubters and critics on the world stage.

It's difficult to say that, in front of an expectant crowd at the glorious Kazan Arena, Pogba dominated or even played a starring role.

Australia's midfield trio of Aaron Mooy, Trent Sainsbury and Mile Jedinak did everything they could to snuff him out and for large part of the game they were successful.

In the first half Pogba produced only sporadic flashes of his ability, with two lofted passes into the box – which ultimately led to little – and a dummy on the edge of the area before a Lucas Hernandez shot about the best he could muster.

After the interval he seemed even less effective. Australia began to offer more of a threat themselves in the final third.

And few could begrudge the Socceroos their equaliser when Jedinak converted a penalty conceded by a moment of Samuel Umtiti madness.

Australia had seemingly done enough to secure a share of the spoils, with France staring at the possibility of déjà vu – Didier Deschamps even mentioned himself in Friday's pre-match news conference that the French had failed to even reach the last 16 in two of the last four World Cups.

But Pogba finally burst into life when his country really needed him.

After picking up the ball in a deep position, the United man powered forward, that trademark Rolls-Royce movement taking him into the final third.

He jinked past one Aussie and linked with Olivier Giroud, the Chelsea man putting the ball back into his path.

Pogba chased the ball down and, with it bouncing up nicely, he managed to deflect a defender's clearance over Mat Ryan and into the net.

As part of the second youngest squad at the World Cup, France need their more experienced stars to take charge every once in a while.

And while Pogba's crucial moment had more than a hint of fortune about it, few can argue he didn't deserve a little luck given some of the flak he has to put up with on a regular basis.

But France expects, and they expect even more.